Congratulations to the Lovin’ the Earth online raffle winners!

Every ticket purchased helped support our mission to motivate people—individually and collectively—to take action against climate change and to nurture their relationship with the earth.

We are deeply grateful to all of the local businesses who provided the raffle prizes. They share our passion for helping each other, the community, and the planet. If you haven’t yet visited their locations or tried their products, we encourage you to get acquainted.

CHANGE IS COMING INDOORS AND OUT for the winner of this gorgeous green prize package.

It begins with a friendly trio of SPEC Master Gardeners who will pay you a visit to talk about how you can improve your garden or create one in whatever space you have available. While you’re waiting for them to arrive give some thought to the custom colour you’d like to have added to your planet-friendly Dunn-Edwards paint from GREENWORKS. Then adorn your walls with framed original alcohol ink artwork by Lions Bay artist JILL FRANKLIN.

If you’ve heard that vegan food is healthy for you and the planet you’ve heard correctly. Dive into the Canada Books award-winning Becoming Vegan, a classic reference to vegan nutrition by registered dieticians VESANTO MELINA and BRENDA DAVIS. While you’re reading, nibble on a gift basket full of treats that are healthy for you and for the planet from EVERLAND—acclaimed Canadian natural foods provider for more than forty years. Then get started on growing your own sprouts with a set of MASONTOPS sprouting lids.

“TIME SPENT AMONG TREES IS NEVER WASTED,” is a quote that we love, and it sums up this prize package perfectly.

Your urban forest encounter begins with the UBC Botanical Garden’s breathtaking GREENHEART TREE WALK RAINFOREST EXPERIENCE. You and three friends or family members will tread suspension bridges slung from treetop to treetop in this amazing adventure.

At ground level, you’ll enjoy a fascinating nature walk with TALAYSAY INDIGENOUS TOURS; we highly recommend their Stanley Park Experience. And speaking of the park, you’ll receive a beautiful framed, limited edition DANIEL ROTMAN photograph of Stanley Park trees. All of this will get you pumped up to browse through LEGACY OF TREES, local author NINA SHOROPLOVA’S new book about the trees of Stanley Park—a finalist for the prestigious Lieutenant Governor’s Historical Writing Award.

Later on, invite a friend to join you for two complimentary cups of java from TREES ORGANIC COFFEE, or make it at home with a 340g bag of delicioso Mexican roast.

When you check in to spend the night in one of SKWACHAYS LODGE’S stunning, Indigenous-themed rooms, you’ll be welcomed with a respectfully chosen variety of items:

We trust that you will enjoy these special gifts and have a restful stay on the traditional, ancestral, unceded territory of the Musqueam, Squamish and Tsleil-Waututh Nations.

OPRAH DESCRIBES SELF-CARE LIKE THIS: “Breathe. Let go. And remind yourself that this very moment is the only one you know you have for sure.”

Your self-care experience begins with an Acupuncture session in Vancouver with natural healer DR. EYAL LEBEL, and a relaxing Shiatsu session with his talented associate, JONI COOK. You’ll be further pampered with a Reflexology session from Yvonne Viel’s DOUBLE THUMBS THERAPY in Yaletown.

After tending to your body, soothe your soul with a home diffuser, planet-friendly essential oils and gentle room spray from GARDEN HEALTH, the West End’s community health and wellness store since 1983—Indigenous-owned and operated since 2017.

Then relax your mind by making jewelry for yourself or a loved one with a bracelet kit from COUNTRY BEADS. Each of these lovely, unique beads features fabric fragments from a recycled Indian sari.

Next, treat your eyes to a delightful print from renowned Canadian artist Randy Hann that will remind you of the simple joys of friendship, laughter and reconnecting with nature.

And finally, let your imagination roam free and your inspiration soar thanks to a limited edition framed photograph of clouds, entitled “What If. . .” 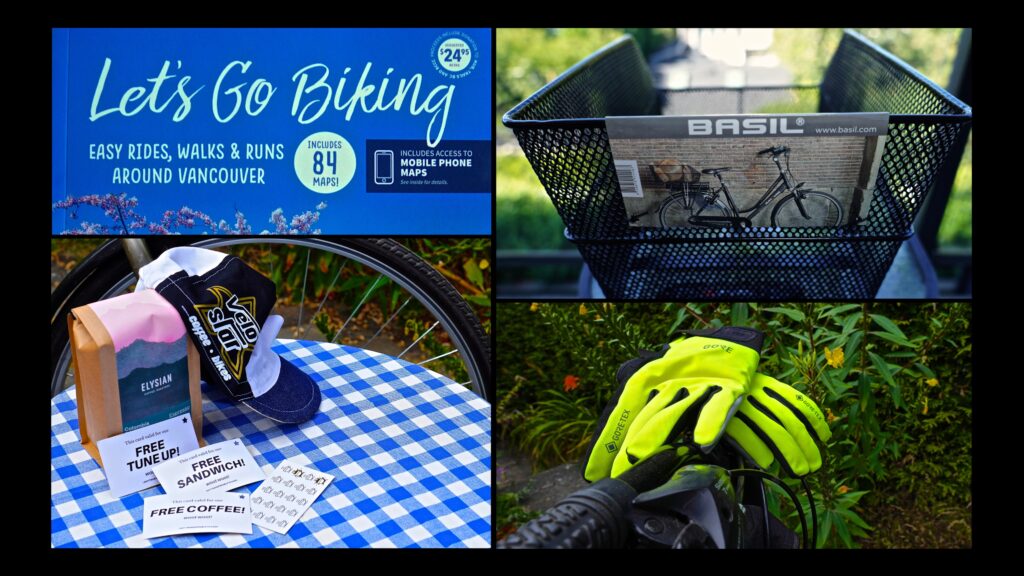 The folks at VELO STAR CAFÉ understand the sentiment. Clint and the Velo Star mechanical team service and repair commuter bikes, road cycles, cargo bikes, bike packing/touring bikes—and e-bikes too. Sit back and enjoy a complimentary cup of their delicious coffee and a mouth-watering sandwich while your beloved wheels are in their good hands. Afterward, you can carry home your new Velo Star bike cap and a bag of Elysian coffee beans in a brand new compact-but-roomy Basil bike basket.

And that’s not all. We’ve added a worn-once pair of cycling gloves to the package; they are literally “re-cycled!” Put them to good use year-round while you are exploring the eighty-five Lower Mainland bike trails highlighted in ‘LET’S GO BIKING: Easy Rides, Walks & Runs Around Vancouver’.

6TH PRIZE: All You Need is Love (For the Planet)

SPEC LAUNCHED IN THE 1960s, a decade dominated by the revolutionary English rock band, The Beatles. Relive the magic of those heady days with ‘Images of the Beatles’, Tim Hill’s tribute book containing hundreds of photos selected from The Daily Mail newspaper’s archives.

In August 1966, shortly before their Sgt. Pepper's Lonely Hearts Club Band album was released, The Beatles played their final paid performance. The concert took place at Candlestick Park in San Francisco. A ticket would have cost you $4.50 back in the day. Now it’s priceless!

When it comes to rock and roll, over four concert-heavy decades legendary rock star photographer DEE LIPPINGWELL took shots of hundreds and hundreds of chart-topping musicians. Her photos and anecdotes will have you fascinated from the time you turn the first page. As a bonus we’ve included her newest book, published in August 2021, that celebrates the never-to-be-forgotten Merritt Mountain Music Festival.

If you’re looking for one-of-a-kind retro pieces to rock your look now that live concerts and festivals are coming out of COVID-19 hibernation, you’ll love shopping with a gift certificate from the mythic WOO VINTAGE CLOTHING on Main Street in Vancouver.

If browsing is your thing, you’ll also enjoy looking through the extensive collection of used, rare and fine books covering every aspect of the arts and more at KESTRAL BOOKS on Fourth Avenue—an inestimable Vancouver fixture since 1985.